I’m what one might call an enthusiastic gardener. I have grand plans about growing stuff and plant out, lots of things, but I don’t quite have a green thumb so not everything grows. My vegetable garden attempts are pretty much the same. I often plant out a variety of stuff and some of it grows.

We’ve got 2 smallish veggie garden beds in our garden.

One was larger but as you can see in the background we put in a chicken coup and run. We recently chicken sat a friends chickens while she was on holiday, it went well so we’ll be getting out own. so in front of the chicken run is pretty hot in summer so I’m thinking of planting chillies/capsicum.

At the moment the other garden bed is a mixture of a parsley/kale forest some pea seedlings , which are in a bit late but the kids really wanted to grow them and some tomato seedlings which unlike the peas are probably in too early, as well  garlic in amongst it all. We’ve just fenced this off form our puppy so I’m a bit excited at what we can plant up the fencing wire in summer, probably cucumbers and beans but I’m keen to try melons as well. I suspect we might try to squeeze some corn in there as well as the good ole Zucchinis. I plant them every year and they always grow. At first they seem a bit slow to fruit then suddenly it’s all day of the triffords and they are just going berserk growing massive zucchinis in what seems like a day. This of course gives you a zucchini glut and there is only so much you can give away and put into savoury dishes.

This week the Sundays with Joy Facebook group made Zucchini Cream Cheese Pound Cake which will be perfect for using up the massive glut of zucchini’s. 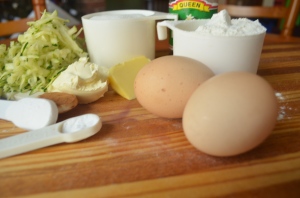 It was really similar to a carrot cake and I was tempted to put walnuts in it and probably will next time. I iced it with Joy’s brown sugar cream cheese icing which improved on the already yummy cake.

recipe from Joy the Baker cookbook