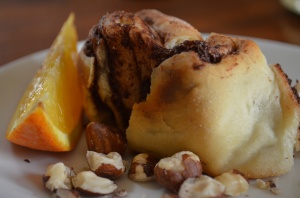 Did you know there is a world Nutella day? I’m serious, its day to celebrate Nutella and make things with Nutella

I first made these scrolls to celebrate World Nutella day. They were pretty tasty and I’ve been needing an excuse to make them again. The excuse came in the form of the Sweet Adventure Blog Hop – Nuts about Sweets.

But instead of using Nutella from the jar I wanted to make my own version of Nutella. I look at a variety of recipes for it, became horribly overwhelmed by the sheer number of different recipes, pondered what to do, then came up with the idea of making hazelnut butter then mixing it in some chocolate ganache and for a twist adding orange zest. I was worried it would be a disaster, but that worry was wasted as it was amazing. 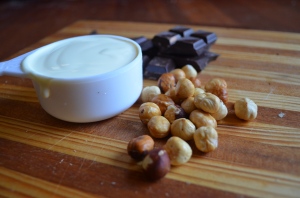 chocolate, cream and hazelnuts just waiting to be  mixed together

Hazelnut butter just waiting to be mixed into…

Place Hazelnuts in food processor, process until they get the consistency of peanut butter. It will take a few minutes so stick with it but it will happen.

Melt both types of chocolate together with eh cream over a low heat. It will look all shiny and yummy.

Add hazelnut butter and orange zest to chocolate cream mixture. Mix well. It will be a bit grainy on account of the hazelnut butter, but taste delicious.

I used a 1/2 quantity of the dough part of Annabel Langbein’s Sticky Buns. But instead of filling it with butter and cinnamon I used my hazelnut choc orange ganache. Rolled it up and cut inot 4cm sections. let them rise again baked at 220 degress c until lightly browned. So very very good.

Part of the Sweet Adventures Blog Hop, this month hosted by Dining With a Stud

All the other delicious nut creations can be found here